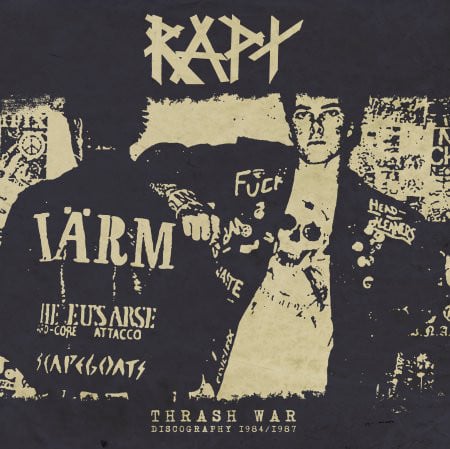 Regular black vinyl limited to 400 copies.
"Noise with distortion - it's the Thrash core. Musical destruction, now another war... it's an expression. Here's the Thrash War!" these are the lyrics of the title track, to give you a picture of the sonic hecatomb that these French maniacs were spawning. Out of tune guitars, manic fast drumming and rabid vocals.. logos of L?RM, KAAOS, HEADCLEANERS, EU'S ARSE on their jackets. And their only 7" released on "Caos Produzioni" by the singer of WRETCHED. So you can easily guess how they were sounding. RAPT were certainly not the earliest Hardcore/Thrash band in the 80ies' French scene but certainly one of the fastest and noisiest. This total discography set authorized by the band's bass player and screamer Olivier collects their Split 7" with Final Blast, all their demos (also including the 3rd one recorded in NYC with a different line-up) and a very detailed selection of rare recordings, most of which have never been released to date. Each session has been transferred from the mastertapes provided by the band and accurately mastered for vinyl, you have never heard the RAPT sounding so powerful and clear as on this ultimate release. Housed in a gatefold sleeve with a fanzine styled booklet full of photos, flyers, zine excerpts and original artworks. The extra 7" has the NYC demo 1987 while the bonus CD has all what you'll find on the LP and 7" + some bonus live and rehearsals. 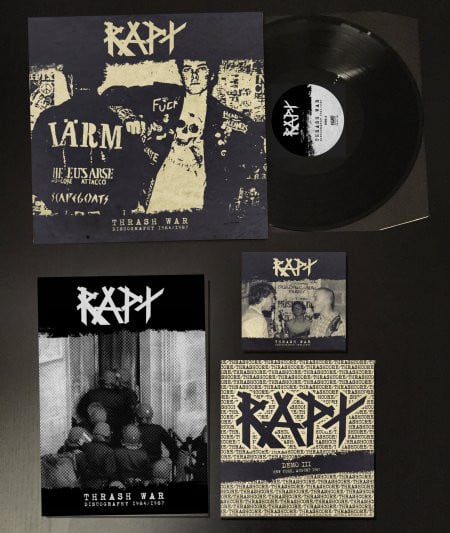